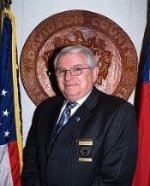 Commissioner Fred McClure was born on February 14, 1942 in Tulsa, Oklahoma. He resides in the Welcome community and is a member of First Alliance Church.

Commissioner McClure served four years in the United States Air Force and four years in the United States Navy and six years in the Lexington National Guard unit. He completed two tours of duty in Vietnam and received the National Defense medal, Vietnam Service Medal and Meritorious Unit Citation during his military career. Following his service in the armed forces, Commissioner McClure moved to Davidson County and is married to Kay McClure. Their family now consists of two grown children and three grandchildren.

Commissioner McClure's term on the Davidson County Board of Commissioners expires in December, 2024. He is currently serving his seventh (non-consecutive) term.